Forums
General
Open Mic
Did anyone here get...

Did anyone here get to see the video of.... Guitar giant pulls Mark Agnesi video after outcry

I don't think Gibson better mess around. To many people have accepted that there are only so many "natural designed guitars". 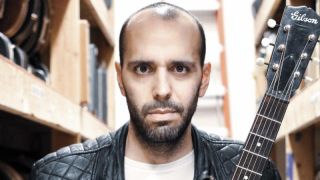 Gibson has done a great job of restoring the faith since its 2018 bankruptcy, following a storming NAMM and a strong set of responses to our probing questions for new CEO James ‘JC’ Curleigh.

In an upload titled ‘Play Authentic’, Agnesi begins by highlighting Gibson’s trademarks, according to Gear News: “It’s a common misconception that a brand is just in a logo. The Les Paul, Flying V, Explorer, SG, Firebird, Thunderbird and ES shapes are trademarked shapes of Gibson. The design, from the components to the actual shapes are an integral part of the Gibson DNA.”

That all builds to Agnesi’s threat to fellow guitar builders: “You have been warned; we’re looking out and we’re here to protect our iconic legacy.”

He follows up by stating, “This isn’t about us being bullies or trying to stifle the boutique marketplace.” Unfortunately, that’s exactly how it comes across.

Following an, ahem, mixed reception from guitarists the world over, the video has since been pulled from YouTube.

It’s an odd move from a company seeking to curry favour with its audience - and even stranger given Agnesi’s previous role as manager of Norman’s Rare Guitars, where he will have presumably seen myriad Gibson-inspired instruments come through his doors.

There’s been no official statement from Gibson regarding its stance on rival guitar builders, or on its withdrawal of the Play Authentic video. MusicRadar has reached out for comment.

I heard about it. Most bigger brands protect their brand, so I'm not sure that Gibson is that much different than Fender and others? I don't know.

I know Fender has threatened many builders over the years, and I assume other guitar makers do too. It makes sense to certain amount. I guess it depends on how aggressively they pursue it.

No online members at the moment