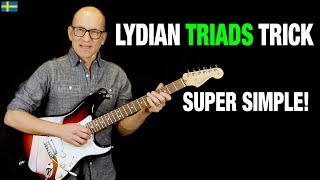 A simple way to get the “Lydian sound”, is to play a major triad a whole step above the root chord. In this example, I’m starting with A major triad. It has the the intervals: 1-3-5.

Then, when you go up one whole step above A, and play the B major triad, you now have six notes. From the B triad we get 2-#4-6 from the perspective of A. All of them except one are present in the A natural major scale (ionian). The one that is different is the 4th interval – it’s raised. Now you have D# instead of D, and the result is the Lydian mode.

Well, we are actually only using 6 notes right? So, the 7th note would be the major 7th, G#. That note doesn’t appear in either A major triad or the B major triad, so you can add it when you are improvising, because both ionian and lydian has that same 7th interval.

» Discuss this
Each course has its own thread under "MGA Lessons" in the forums.